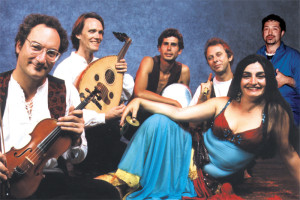 “You’d have to travel thousands of kilometres, endure sizzling
temperatures and ride a camel to hear music as authentic as that of Yalla!“
Sarah Hudson The Herald Sun, Melbourne

“Upbeat middle-eastern dance music…from an unlikely location.”
Lucky Oceans ,The Planet, Radio National
“An ensemble that is vibrant, colourful and able to sustain a high energy level throughout its entire performance”
THE NEWS Gippsland

An exciting six piece band from Melbourne,  Yalla brings the traditional music and dance of the Middle East to life with their own East meets West flavour. They have performed for 20 years in all major festivals around Australia.  They are a spicy mix of quarter-tone accordion, oud, ney, percussion, violin and mesmerising dance. With Phil Carroll on the quartertone accordion, mizmar (arabic oboe) , ney (arabic flute) and vocals. Maria Sangiorgi dancer, percussion and vocals and Phil Gunter on oud (lute), Andrew Kuhlmann on percussion (tabul,darrabukas,reqs,dufs etc)
Yalla! performs on the concert stage and as an acoustic roving show weaving through the crowd. 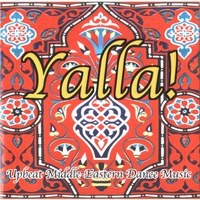 Listen to or buy Yalla! CD

ABOUT THE MUSIC
Yalla! feature the Egyptian styles of Shaabi (folk), Baladi (urban folk) and Sharqi (classical) as well as music of Persia, Turkey, North Africa ,Tribal and Trance.